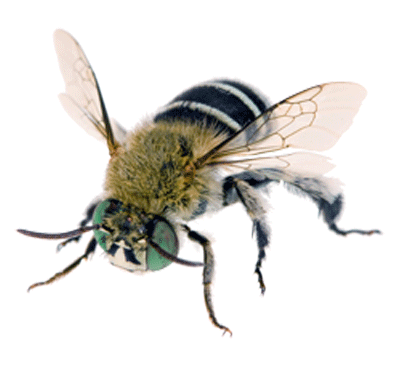 Wasps can be broadly classified under two categories – solitary and social. As the name suggests, the social wasps live in small colonies with queens and males while solitary wasps live alone and lay their eggs next to a food source. Some wasps are predatory/parasitic while others play an important role in pollination. The most common wasp that people encounter in Perth is the paper wasp. The European wasp is also occasionally sited and these need to be removed immediately. The Department of Agriculture and Food will come in and remove them free of charge. There are over 12,000 different species of wasps present in Australia with some being aggressive in nature. The length can range from barely visible to the naked eye to a few centimetres in length. Wasps are generally slender compared to bees and are less hairy. They have two pairs of wings with the hind wings generally being shorter and smallish antennae.

Social wasps tend to have a nest which looks like an inverted code with one queen and workers, eggs are layed in cells of the nest (not too dissimilar to the cells of a bee hive). As a general rule paper wasps are actually beneficial to have in the garden, as they feed on nectar (and thus pollinate plants) and also feed their larvae.

Wasps can build nests outdoors under eaves or, if they can gain access, can find sheltered areas inside your home such as wall cavities, roof spaces and attics.  If a nest is discovered don't attempt to get rid of it yourself. Call a professional pest control supplier.

Wasps are able to sting multiple times, and their nests usually contain more than one individual at a time. For this reason allergic reactions can be similar to bee stings with differing degrees of sensitivity.

Individuals can be quite territorial so if you spot a paper wasp nest do not approach, call a professional who can help you.

HOW CAN PESTS OUT WA HELP

Wasps have the potential to attack in large numbers if their nest is disturbed. It is best to treat a nest earlier in the year before numbers increase and the wasps become more aggressive, increasing the threat of stings during treatment.

Wasps can also sometimes be confused with our both Native Bees and European Honey Bees.

If you do find a colony of Bees, Pests Out WA recommend contacting a trained Apiarist to remove the hive.

However, control or destruction may be necessary in some circumstances as they can become dangerous, particularly when they swarm. Swarming is the process of Bees investigating their environment to locate a new nesting site.

To ensure the safety for your staff, or family, choose our Perth Bee control service.